Colorado: An Example to States Planning to Capitalize on the Monetary Potential of Legalizing Cannabis 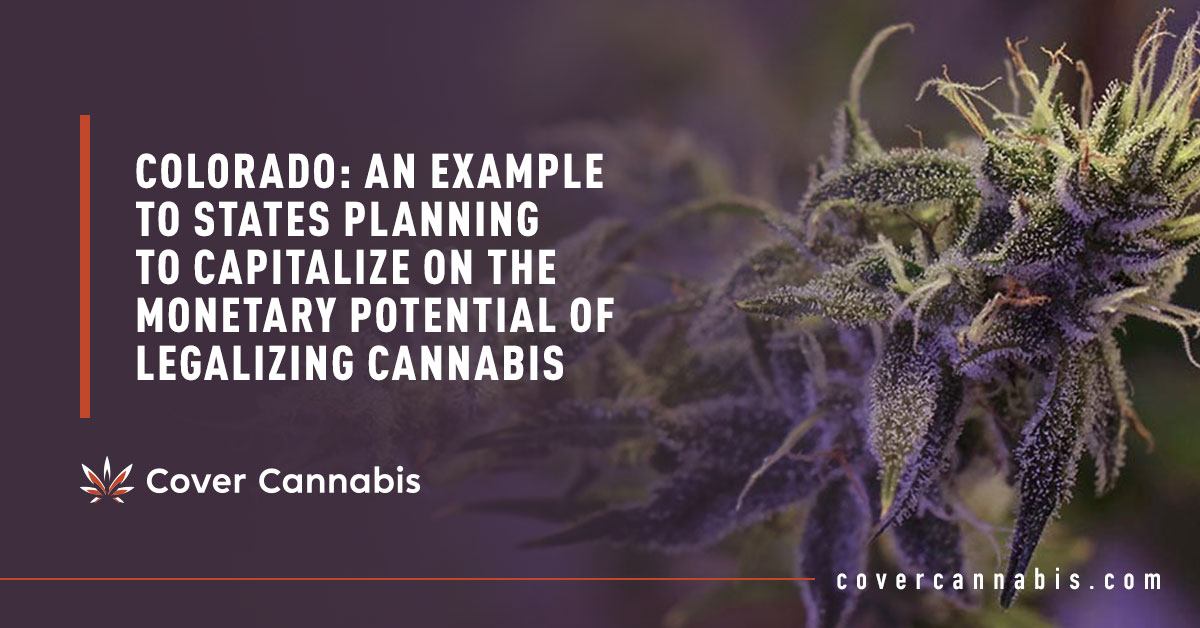 Every other state in the union to go legal has been plagued with the same deluge of problems and issues in the legalization process that Colorado experienced when it began what it called, “The Great Experiment”. Commendably, Colorado is sticking to it!

Then governor of Colorado in 2012, John Hickenlooper stated that his government had fully anticipated the variety of problems that could occur with legalization:

“This will be a complicated process, but we intend to follow through. That said, federal law still says marijuana is an illegal drug so don’t break out the Cheetos or gold fish too quickly.”

Perhaps it was the months of planning ahead of time in an effort to trouble-shoot all the problems that could occur that paid off at first. Every other state since, that has gone “Recreational-Legal”-even north of the border for the whole nation of Canada, has been besieged with problems since legalization.

Ironically, Colorado is only now experiencing the same kind of problems even though its beginnings went surprisingly smooth. In spite of the new issues Colorado is experiencing, Colorado citizens are determined to hang in for the long run.

Here is an informed examination to determine why Colorado’s Medicinal and Recreational legalization became the “success story” it is today even though at times it has come close to utter failure.

Even though Colorado Attorney General Cynthia Coffman, originally voted against legalization, she is now firm in her belief that the people have spoken:

“I look at this as a state’s rights issue, and Coloradans have made the choice to legalize marijuana, and I would not support the federal government coming in and reversing that decision for us.”

Coffman admits there are problems: The black market still exists, Pot gets illegally shipped across state lines, and the media has pointed out that Colorado’s crime rate rose by 4% immediately after legalization. In the long run however, Coffman has recently told CBS news:

“So I would say we’re somewhere in-between great success and absolute failure. And we’re leaning towards success.”

Colorado started the ball rolling and now, by any financial measure, Marijuana in America has become an overwhelming success. CBS news put some recent figures together and said in a recent report that,

“The legal cannabis industry is projected to reach $10.8 billion in sales this year—larger than the sales of ice cream ($5.1 billion) or baby diapers ($6.4 billion).”

Colorado’s legalization was such a resounding success, that CBC News in Canada reported in 2017 that every city in Colorado had more dispensaries then Starbucks and McDonald’s combined!

According to the state Department of Revenue, Colorado dispensaries have sold over $6 billion worth of legal marijuana since retail sales began on January 1, 2014.

One of Colorado’s most problematic set-backs was that statistics showed that its crime rate shot up by 4% in the first year after legalization! But it wasn’t for crimes one might suspect to be related to Cannabis. For example, one of Colorado’s new laws brought in with legalization was to prohibit citizens from openly smoking Marijuana in public.

Denver’s Chief of Police, Robert White pointed out however, that surprisingly, smoking Pot in public has never been a problem. And after all the arrests where analyzed that caused the crime rate to spike temporarily, Chief White was happy to release to the press that the reason the crime rate rose and later stabilized back to expected levels was due to transients entering the state at the lure of “available weed” and committing petty crimes to obtain it.

A report from the Colorado Department of Public Safety (LAKEWOOD, Colo., Oct. 26, 2018) stated that:

“Data suggests that law enforcement and prosecutors are aggressively pursuing cases against black market activity. The quantity of cases filed for serious marijuana-related crimes has remained consistent with pre-legalization levels…”

Many people believe that one of the reasons for Colorado’s “Great Experiment” being a success was a dramatic improvement to one of America’s most pressing social emergencies: opiate addiction and the crimes committed to obtain opiates.

One of Colorado’s residents, Pam Hadfield who co-founded Hello MD, a social service that provides online matching of patients with medical resources, shared her personal story with CBS News about her own addiction to opioids that she ended by switching to marijuana.

“This is a viable alternative to an enormous problem that’s gripping our entire country. It worked for me. And you could say that it’s anecdotal. And yet, we’re hearing from these people every day: ‘This has changed my life.'”

“Here again, what could be another lesson to learn from Colorado, where opioid use has fallen since legal recreational pot was allowed.”

By judging from the diverse amount of new Cannabis businesses in Colorado, is the exciting observation of job and new business creation in areas that previously didn’t even involve Marijuana, but since, have become intimately related to it…like insurance!

At a Cannabis trade show in Seattle recently Juan Cruz of Cover Cannabis Insurance stated in a conversation that,

“Basically, Cannabis insurance is just like anything that your standard business like Ford Motor Company would need, except we specialize in doing that for the Cannabis space.”

Colorado’s resilience and determination to make the state’s Recreational Cannabis legislation work, was brought out in a question to Colorado Attorney General Cynthia Coffman by CBS News: “Do you think the day will ever come when Colorado will basically roll back what it’s done with marijuana legalization?”

“I don’t. I don’t see that happening,” Coffman replied. “I think probably more people would vote for legalization if they had that opportunity now than last time.”

If you’ve opened shop in any type of Cannabis enterprise in a Marijuana legalized state anywhere in America and are looking for the best options to improve and protect your investment, the professionals at Cover Cannabis, America’s first and most dependable Cannabis insurance firm are here for you.