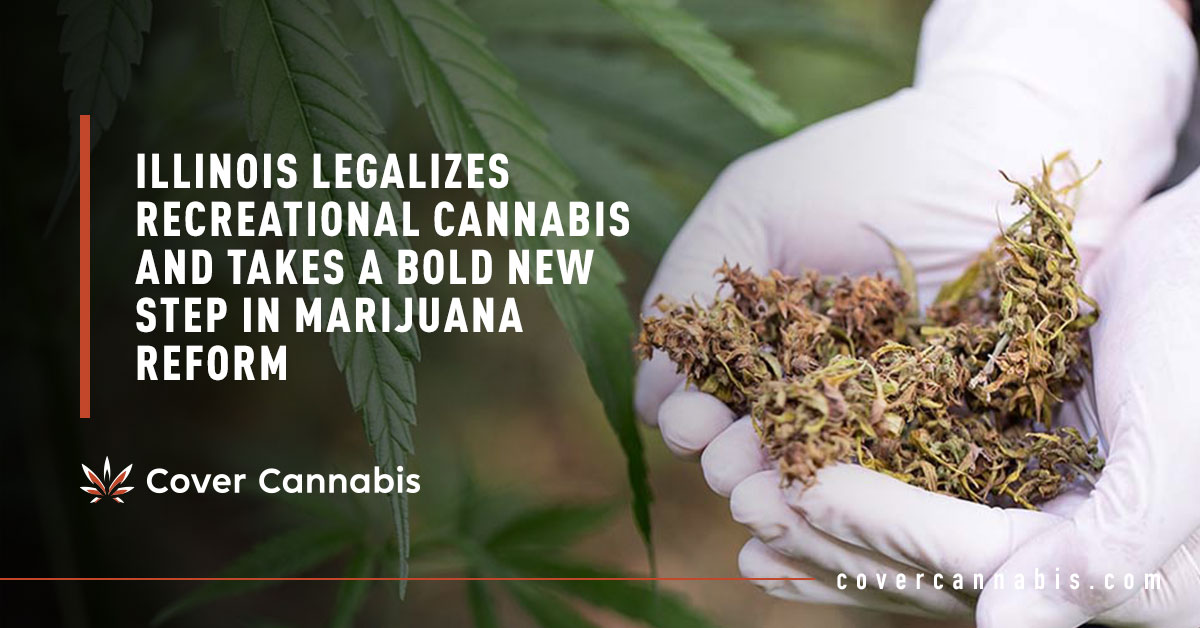 As new states jump on board the growing trend to add recreational cannabis legalization to their existing medical marijuana statutes, it’s becoming apparent that there is also a parallel trend to add an exciting new piece of marijuana reform legislation along with it. It’s as if America’s states are playing a game of legislative, “One Upmanship”. When it comes to legalizing cannabis whether its categorized for medical or recreational use, Illinois is now leading the way and is on the cutting edge of both trends.

Not only has Illinois legalized possession of small amounts of recreational marijuana, and licensed home cultivation of medicinal cannabis with up to 5 plants as of June 25, 2019, it has included an exciting new provision along with it. Illinois is now set to pardon 800,000 citizens presently burdened with life-time criminal records for convictions for cannabis possession of 1 ounce or less. In September 2019, Illinois will also begin issuing special licensing for large scale commercial cannabis cultivation, processing, sales and distribution within the state.

While officially signing the new bill into law, Illinois Gov. J. B. Pritzker stated that, “Legalization of adult-use cannabis brings an important and long over-due change to our state. And its the right thing to do! This legislation will clear the cannabis records of non-violent offenders through an efficient combination of automatic expungement, a gubernatorial pardon, and individual court action.”

The way an expungement works in most states, is by a judge sealing a criminal record from view and then erasing it completely as if it never happened at all. This is only after the convicted person seeking a pardon has paid for an expensive lawyer and subjected themselves to months of prolonged legal manoeuvring in the courts to do it.

What makes Illinois so revolutionary is that its new cannabis statute, signed into law by Illinois Governor J. B. Pritzker on June 25, 2019, drops the ban on possessing 30 grams (one ounce) or less of marijuana AND is directly linked to the new provision of automatic expungement.

Illinois officials estimate there are 770,000 marijuana-related criminal records eligible for automatic expungement. Up to now, this has meant that Illinois adult citizens who were convicted of possession of one ounce or less of marijuana became second class citizens.

A criminal record that stays with a person for life makes it next to impossible to get any kind of meaningful work above minimum wage. Many convicted felons, even for small non-violent offences of possessing one ounce or less of marijuana became “hardened” criminals while incarcerated.  Once released, they faced a world of “closed doors” when in came to finding employment with healthy living wages. Instead, many of them turn to a full-blown life of crime to make a “decent” living.

Automatic expungement of convictions for the non-violent cannabis related offences will make a dramatic change for the better in the lives of many Illinois citizens who resisted falling back into a life of crime. When asked by a potential employer if they have a criminal record, they will now simply be able to reply with all honesty and answer, “No”, and are free to seek the livelihoods they had before their arrests.

Once the home of the notorious gangster Al Capone, who was allowed to run rampant by the civic government corruption of Chicago during the “Roaring Twenties”, the state of Illinois has taken a bold new stance by admitting its past wrongs. Starting at the top level of Illinois state government with Gov. J. B. Pritzker, lawmakers drafting the new measure have made Illinois the 11th state to legalize recreational marijuana. Gov. J. B. Pritzker emphasized that his elected office feels very strongly for, “the need to repair the damage done by nearly a century of our previous governments’ war on cannabis.”  He has also made it very clear that Illinois previous governments’ persecution of people who enjoyed the medicinal, relaxing effects of cannabis was particularly harsh on minorities who he stated were statistically most likely to be targeted for arrest and prosecution for marijuana offences.

Cannabis offenders were “forced to live in permanent second-class citizenship… and forced to face those collateral consequences everywhere,” said Rep. Jehan Gordon-Booth, a Peoria Democrat who led the expungement push.

Kim Foxx, Cook County States Attorney stated to the press at the official signing ceremony that, “This bill is revolutionary in its work to right the wrongs of a failed war on drugs. My office can start moving forward to vacate these low-level convictions.” State’s Attorney Kim Foxx actively pursued the expungement provision with Gov. Pritzker because it was, “prosecutors who implemented these convictions in the first place.  It was my obligation to have a seat at the table and make sure that the work that my office and offices like mine across the state have done to inflict harm were there to repair the harm that we caused.”

There are several details of the new bill sitting off stage that will create a significant stimulus to the economy of Illinois.

Ironically, the manufacture, possession or delivery of 30 to 500 grams of cannabis in Illinois still remains a crime. But by September of 2019 this is all set to change!

Pritzker’s deputy governor, Christian Mitchell, noted that “An easier path to expungement for past offences makes sense in a state which has now created an industry in which authorized dealers (by September 2019) will handle tons of the product. For them (past offenders) to have to deal with the collateral consequences while wealthy businessmen get to do it Scot-free because it’s legal now, there’s a moral bankruptcy there.”

If you’re in Illinois or any other state opening up new opportunities in the legal adult recreational-use cannabis market and are interested in joining the “Green Rush”, your timing is right on the mark!

A new beginning for past, non-violent cannabis offenders and regular citizens of Illinois awaits!

Illinois citizens will now have their chance to create legal cannabis businesses by this September as the state will open up licensing applications and eventual approval for production, distribution and retail sales and purchases of cannabis on all levels.

Both the crowning cap and solid foundation of your new cannabis business will be dependable insurance to protect it from all forms of liability, enabling you and your business to stay profitable from the onset.